I got caught giving some bad advice this week, so I decided to share here as penance. TL;DR: Probabilistic counts are great, but they shouldn't be used everywhere.

Counting stuff is hard. We use probabilistic algorithms pretty frequently at Mozilla. For example, when trying to get user counts, we rely heavily on Presto's approx_distinct aggregator. Roberto's even written a Presto Plugin and a Spark Package to allow us to include HyperLogLog variables in datasets like client_count_daily.

These algorithms save a lot of compute power and analyst time, but it's important to remember that they do introduce some variance.

Unfortunately, we can't get the standard error to be much smaller than 1%. Databricks has a writeup here which explains that the compute time for their probabilistic estimate starts to be greater than the compute time for an exact count somewhere between an error of 0.5% and 1.0%.

Most of the time, this isn't an issue. For example, if I'm trying to count how many clients used a Container Tab yesterday I don't care if it's 100mm or 105mm; those numbers are the same to me. However, that noise becomes distracting if I'm building a dashboard to track year over year change.

I put together an example notebook to explore a little. I created a toy dataframe containing 7 days of data and 1000 client_id's per day. Then I got an approximate count of the clients for each day. Here's what an arbitrary set of daily errors look like: 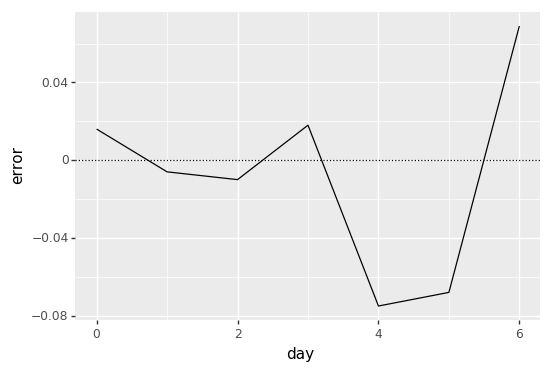 By default, pyspark's approxCountDistinct aggregator has a relative standard deviation (rsd) of 5%! The maximum error magnitude we see in this dataset is 7.5% (day 4).

In my opinion, Spark's documentation obfuscates the real interpretation of this rsd value, calling it the: "maximum estimation error allowed". In reality, there is no "maximum error" allowed. The rsd is a standard deviation for an approximately normal distribution. Roughly one in three errors are going to be bigger than the rsd.

What's worse is that this graph makes us think there's movement in this metric over time. In reality, the user count is perfectly flat at 1000 users every day. Since these errors aren't correlated over time, we see big day over day swings in the estimates. The largest swing occurs from day 6 to day 7 where the user count jumps by 13.7% (-6.8% to 6.9%)!

So what's the take away? Probabilistic counts are still super useful tools, but it's important to consider what kind of error they're going to introduce. In particular, don't use probabilistic counts (like approx_distinct) when looking at year over year rates or plotting trend lines.

Feel free to share any feedback via email! You can reach me at [email protected]. Look forward to hearing from you!

Want to get notified next time I publish something? Sign up for my newsletter here.